Whale shark conservation volunteering is your opportunity to protect the largest species of any fish...

Whale shark conservation volunteering is your opportunity to protect the largest species of any fish. Learn more about endangered marine life and whale conservation projects. If volunteering with whale sharks have always fascinated you, this is the perfect chance to get up close with these gentle giants.

Whale shark research internships in Mexico, the Philippines, Mozambique, Madagascar or Belize are the perfect places to get hands-on. Dive with whale sharks in order to collect data and take pictures for scientific databases. International whale shark volunteers will be fully involved in the research work. Gain valuable experience in marine biology and whale shark conservation efforts! 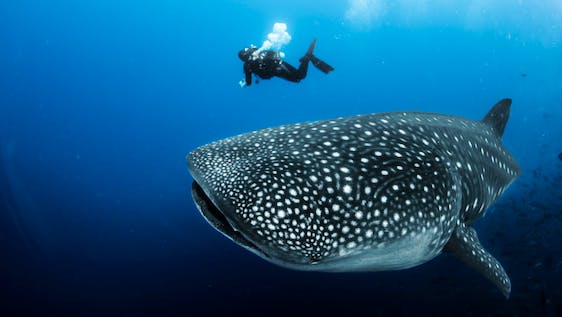 Feel the thrill of swimming with a whale shark, the excitement of spearing the invasive lionfish, and the satisfaction in helping protect coral reefs. 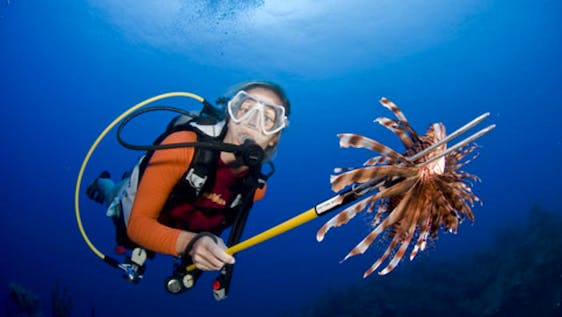 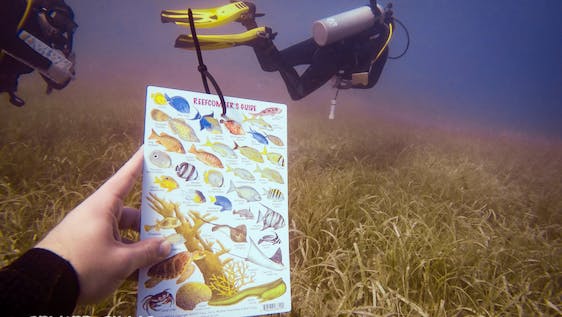 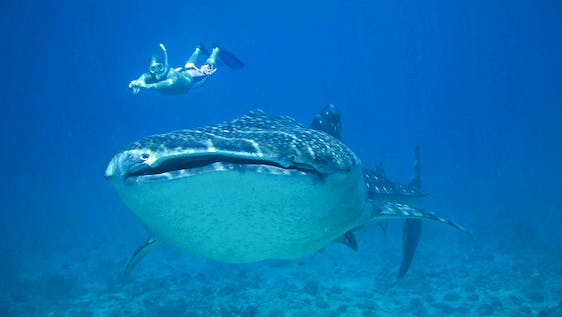 Work in the field to help Whale Shark conservation! 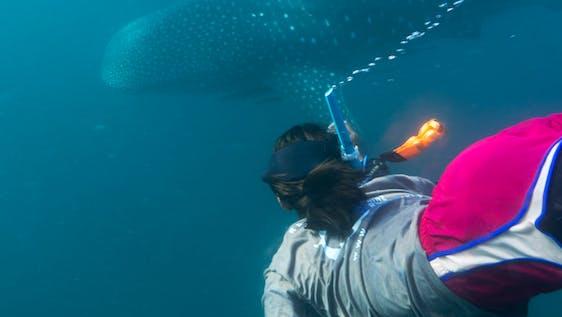 LAMAVE's whale shark research and conservation projects will allow volunteers to study whale sharks in the water through photo identification and other research work. 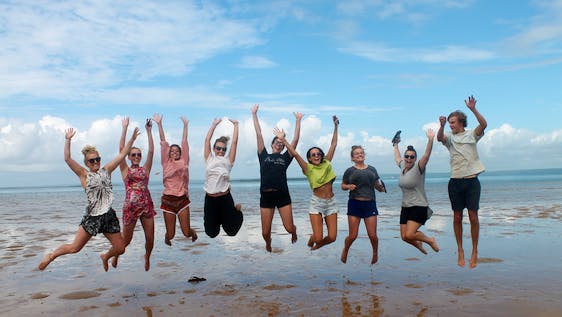 Spend time working on worthwhile projects in the community, take a thrilling safari and then spend a week on the palm fringed beaches of Mozambique. 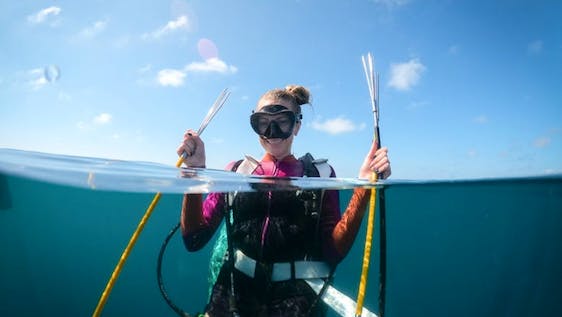 Reef Conservation on a Caribbean Island

Hands-on ocean conservation on a picture perfect Caribbean island located on the Belize Barrier Reef in the Sapodilla Marine Reserve Park in Belize. 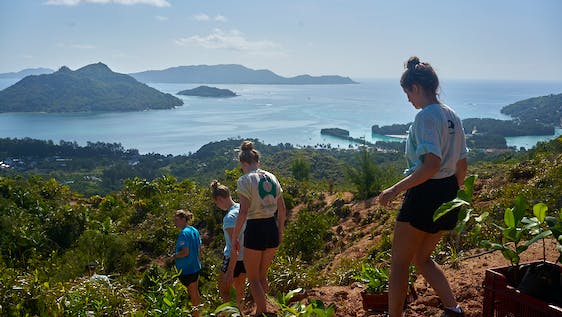 Travel to the Seychelles and engage in crucial conservation initiatives alongside one of the leading marine & terrestrial data collection organisations.

Volunteers excited by what lies beneath the ocean will be intrigued by the somewhat unknown whale shark. They are the largest fish in the ocean and get their name due to their size which can range up to 14 meters. These docile creatures form no threat to humans which may convince more volunteers to help out with conservation projects. There are only about 1000 whale sharks registered and there’s still a lot unknown about these giants of the sea. Marine loving volunteers with a bit of time on their hands, a passion for diving and exploration can contribute to the conservation of the whale shark. Your adventure will take you to some of the most exotic locations in Africa. Don’t miss out and volunteer for an opportunity of a lifetime.

There’s still a lot unknown about the whale shark. Your first question may be, is a whale shark a shark or a whale? They are not to be mistaken for whales because, despite their size and way of feeding, they have nothing in common with whales. They are the loners of the underwater world and generally keep to themselves. They breathe through gills which makes them a fish and not a mammal. Let’s take a look at a few other interesting facts about the largest fish in the sea.

What is the Whale shark conservation status in 2023?

According to the IUCN, the whale shark is considered endangered which means it has suffered a population decline of more than 50% in the past three generations. There are improvements and conservations efforts that are in place but there’s still a long way to go. Whale sharks were reclassified in 2016 and are now considered an endangered species. This means the whale shark is only two classifications from being extinct.

Whatever we’re doing to save these gentle underwater giants needs to be continued and even more needs to be done every day. Continue reading to understand why this underwater species is so vulnerable and what we can do to prevent its extinction.

Why are whale sharks endangered?

There is a combination of factors which is contributing to the decrease of the whale shark population. Let’s take a closer look at the main contributors to this decline below.

Shark fins are still in great demand in China along with its meat and other parts that are used in medicinal products. Decreasing the demand for shark products is one of the most effective ways to decrease the threat to whale sharks. Whale sharks populate tropical waters and are mainly threatened around southern China.

There’s little demand for whale shark products in the Gulf of Mexico which means they are not actively sought after there. Transport and shipment of whale sharks are thankfully prohibited in most countries. This makes it almost impossible to sell and transport them to the other side of the world which inhibits the trade of this mega marine animal.

Fishing and entrapment in fishing gear

Whale sharks are often victims of bycatch during legal fishing activities. Although technology is improving and may improve even more in the future, bycatch remains a big threat. Governments are incentivizing fishermen to donate whale sharks that are victims of bycatch to science instead of stimulating the Asian market.

Increased coastal traffic for travel tourism purposes including diving, whale watching, and fishing pose a significant risk to the whale shark as they can collide with the boat or the propellers causing serious injuries.

Garbage ranging from cans to plastic bag and bottles often end up in the sea and posing a health threat to the whale shark as they ingest toxic and indigestible trash. Marine pollution poses a huge threat nowadays affecting all marine species.

These are the main reasons why whale sharks are being threatened, but obviously every little support helps. If you like diving and are fascinated by the underwater world, volunteer for a marine conservation project and give whale sharks a fighting chance.

How many types of whale sharks are there?

There is no known subspecies of whale sharks. However, whale sharks are still slightly mysterious to us and little is known about subspecies of this giant fish. There’s a lot more research to be done. This could be part of your tasks as a volunteer! If there was a categorization to be made, they would be categorized by their location. There are the sharks that are inhabitants of the Atlantic Ocean and those of the Indo Pacific Ocean.

Although whale sharks are free to move and migrate, research points out that they do seem to demonstrate site fidelity. They prefer to inhabit warmer temperatures and stick to the surface where it is slightly warmer. Young male whale sharks also show a preference for the coastal areas which makes them vulnerable to bycatch.

Where can I volunteer with whale sharks?

Volunteers eager to contribute to a whale shark conservation project will most likely head to the southern part of Africa. Destinations like Mozambique, Tanzania, Madagascar, and Swaziland will welcome whale shark lovers with open arms.

Those of you who would prefer to discover South America can join a project in Belize and help the gentle giant of the sea there. Whale sharks are still not widely known so conservations projects are not plentiful. Be sure to raise awareness by contributing to this important cause.

Volunteers who are a fan of diving will get the chance to dive into some of the most fascinating locations on the planet. Most projects are located around the southern part of Africa which will give you access to the most exclusive nature.

How can I help to save whale sharks?

We can all play a small role in increasing the chance of survival for whale sharks. By refraining from buying and consuming shark fin products, you are disabling the market which will discourage the hunt for whale sharks in the future. Volunteers with more time on their hands, can join whale shark conservation projects and help with more tasks ranging from observational research to diving excursions to clean up the ocean. Travel to some of the most exotic locations and donate some of your precious time to a marine conservation project. These are some tasks you will be spending your time on if you engage in a whale shark volunteer project.

Are you ready to get up close to the gentle giant of the sea? Whether your project will take to Mozambique, Tanzania or Madagascar. Let’s look at some of the things you will be doing:

These tasks are related to important research about the whale shark but it may be possible that volunteers also monitor other sea life animals and the coral reef during this experience. Each project has a different emphasis. Some will focus a lot on research while others will have more of an environmental impact.

5 benefits of volunteering with Whale Sharks

Being the loners that they are and preferring a life in solitude, spotting whale sharks is incredible. You will be contributing to the conservation of the largest fish in the sea which is slowly nearing extinction. Besides doing good for the planet and indulging in the best shark diving experience ever, let’s take a look at what other benefits your volunteer adventure will have in store for you.

Not only will you learn more about the whale shark during the project but also about their environment. You will get hands-on experience in conservation and observation. The volunteer experience will give you opportunities to do valuable research and it will also bring you in touch with the local community. This will be a wonderful opportunity and time for cultural interchange.

Besides the local community, you will also connect with other volunteers who have the same goal as you and similar interests. Rest assured that you will make meaningful connections with those who share your love for marine life.

If you’re an adventurer and love to travel, nothing will stop you from discovering your surroundings. Grasp this chance to explore your surrounding and discover the world that lies beneath the surface.

Volunteering is a brilliant way to expand your perspective of the world. Issues that seemed huge problems before, may seem trivial after your whale shark volunteer experience. Life experiences like this provide valuable baggage that can prove helpful in the future. Volunteer and witness how you become a stronger individual.

Multiple research has demonstrated that volunteering leads to better health and a healthier state of mind. Those who volunteer have lower mortality rates, function better and suffer less from depression later in life. Volunteer with whale sharks and experience the satisfaction of knowing you are helping an endangered species. Volunteer abroad and see what it does for your health and happiness!

Volunteering for a whale shark conservation project will teach you a great deal more than the habits massive marine animal. You will learn about the environment and the culture of your destination too. Volunteer for a whale shark project and reap the benefits for years to come.