Volunteering in Nicaragua is the perfect way to discover untouched beaches, dense rainforests and volcanic landscapes while giving back to the local communities...

Volunteering in Nicaragua is the perfect way to discover untouched beaches, dense rainforests and volcanic landscapes while giving back to the local communities. The 'land of lakes and volcanoes' offers diverse geography and amazing sites to visit far away from the mass tourism of other places in Central America.

Volunteer your time to support NGOs in Nicaragua. Do you love sea turtles? Join a conservation project to protect the rare animals and work at a baby turtle orphanage. Releasing the sea turtles back into the ocean is truly a once-in-a-lifetime experience. 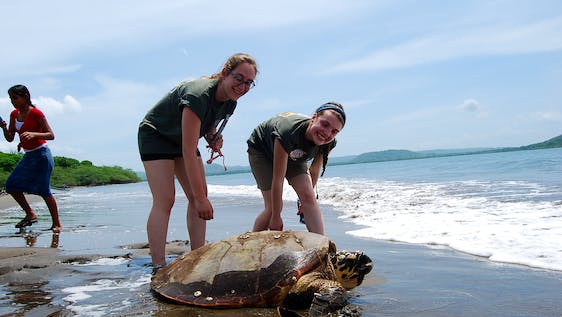 Volunteer to help us conserve one of the most endangered sea turtle populations on the planet. 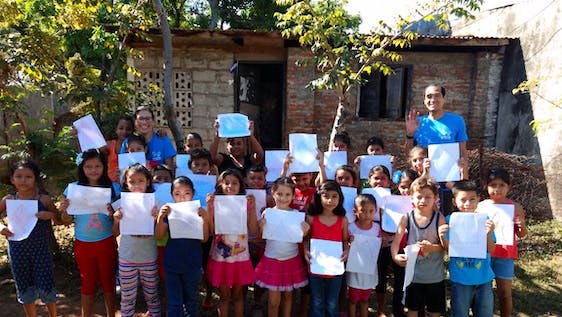 Help Nicaraguan children from vulnerable backgrounds develop their skills and knowledge by supporting them in their education through teaching, and reviewing.

With its old-fashion charm and diverse nature, Nicaragua is the ideal destination for merging volunteer work with your passion for traveling. Lively culture and a constant political improvement with neighboring countries lead to an increasing number of tourists every year. Although the accessibility to Nicaragua has never been better, the general development is still in progress. If you decide to volunteer in Nicaragua, there are a lot of options to contribute to the important work of social projects.

Despite the political stability, improved infrastructure and approachability of Nicaragua, it is still a developing country that can benefit greatly from international volunteers. Read on to learn how you can make a lasting impact by supporting local projects on-site.

As a volunteer in Nicaragua, you have the unique opportunity to take part in the educational and environmental development of the country, which is still in progress. As the second poorest country in the western hemisphere, there are still many problems that need to be faced. Local volunteer work in Nicaragua will contribute to a better environment and general development.

Although education is compulsory and basically free, there are still many children that have never seen a school building from the inside. One main problem is the additional costs for school uniforms and material that can't be afforded by a majority of the poor population. Many of the children for poor families also need to work to support their parents financially instead of going to school. Therefore, the statistics are quite alarming. In the past few years, 20% of the children didn't go to school at all and only 56% graduated.

As a volunteer in Nicaragua in the field of education, you can help to raise these numbers. Within many programs, you have the opportunity to provide education to children and the community:

Volunteers who help in this program field provide maybe the greatest impact on those who need it most. Quality education is the key to the positive development of a community.

Work for a sea turtle conservation

Located on the northwest Pacific coast of Nicaragua, the Estero Padre Ramos Nature Reserve is one of the most ecologically important natural areas in Nicaragua. A large mangrove estuary surrounded by several small beach communities is a critically important hawksbill nesting area. Get involved in protecting these amazing sea turtles by joining a social project as a volunteer in Nicaragua and carry out some of the following tasks:

Your volunteer work in Nicaragua at a sea turtle conservation program will vary depending on the season you are planning on volunteering.

During the nesting and hatching seasons, you will be actively volunteering and working with baby sea turtles, collect eggs from nests and bring them to hatcheries where the baby sea turtles can hatch in safe surroundings and then be released into the ocean. Most projects also welcome volunteers outside of the nesting and hatching seasons to engage in other activities like beach cleanups, crocodile, mammal and bird research as well as teaching projects.

For girls who have suffered abuse and neglect, a safe place to re-group and thrive is essential to their well-being and future happiness. Also, most women have subordinated lives and need support to gain knowledge in different fields and to become more independent. As a volunteer in Nicaragua in the field of women empowerment, you will work and help in different tasks and will be part of an amazing team that teaches women different skills and encourages them to become more independent and confident. Of course, your daily to-do’s vary and depend on the volunteer project you will be working for, but the following list gives you an overview of the different tasks that you might be doing as a volunteer in Nicaragua:

If you are thinking of becoming a volunteer in Nicaragua in the field of women empowerment, you do not need to be a native speaker of English or Spanish. Most often, women attending these projects are not able to speak English themselves and can understand little or none. Thus, as a volunteer in Nicaragua, it is sufficient if your English skills are basic but it is also recommended to have a basic knowledge of Spanish.

The suggested daily budget for living as a volunteer in Nicaragua is between US$10 and US$47. This is an estimate made considering the average price of some of the services you might need and things you might want to buy when volunteering. It gives you a general overview of how much things cost in this country, so you can be prepared and save the money you will need.

Additional costs you should consider for your volunteer work in Nicaragua:

An exemplary overview of living costs in Nicaragua (in US$, for one person) is:

Things to know before you volunteer in Nicaragua

When you travel to a different country for voluntary work it is important to familiarise yourself with its culture and social characteristics. This helps you to settle in quickly and avoid misunderstandings. These are some tips that you might find helpful when preparing for your volunteer work in Nicaragua:

The culture of Nicaragua is somewhat varied in different regions due to the different influences that were exerted on the parts of the country. For the most part, you will encounter a strong Spanish influence. With the Spanish conquerors during the 16th century, the propagation of Catholicism started. Nowadays, over 90 % of the population belong to the Christian Church. An important fact to know: the Roman Catholic Church exerts a great influence on politics in Nicaragua. Therefore, many educational institutions are under the responsibility of Catholic bodies. Due to the wide distribution of Catholicism, locals hold numerous festivals to honor patron saints and the church. The mixture of Catholicism and native customs has resulted in a strong culture of fiestas based on the honoring of certain saints.

The eastern half of Nicaragua, however, was once a British protectorate. It is thus strongly influenced by British culture. Most people from the eastern region of Nicaragua still speak English as a first language. You will also notice that the Protestant religion is favored over Catholicism here.

Some general tips for your stay and volunteer work in Nicaragua:

Going abroad always includes some health issues and precautions that need to be taken into account, especially if you are traveling to a country with tropical temperatures and wilderness. The health risks whilst traveling will vary between individuals and depend on your activities, length of stay and general health.

Who can volunteer in Nicaragua?

You might have noticed by now that there are a lot of different projects that require different skills and abilities from their international volunteers. While you can find out the specific requirements for each project on their profiles on Volunteer World, here are some general requirements that apply to most projects in Nicaragua:

Visa regulations to volunteer in Nicaragua

You have made it to the last section of this guide, which is another really important aspect while planning your trip as a future volunteer in Nicaragua: getting your volunteer visa for Nicaragua.

Please consider that the following information is based on a best practice approach, which has been made according to the best of our knowledge and in cooperation with several volunteer organizations. That's why you should please make sure to discuss your visa requirements with your contact person on Volunteer World. If in doubt, we also recommend getting in touch with the Embassy of Nicaragua or consulate in your country .

There are some general requirements you should comply with upon your arrival:

Citizens of the United States, Canada, Australia, New Zealand, and the European Union require a passport and payment of a $10 USD entry fee upon arrival to enter Nicaragua and may stay for up to 90 days.

If you are not a citizen of the United States, Canada, Australia, New Zealand, and the European Union you may be required to obtain a visa either upon entry or prior to arrival in the country. Contact the Nicaraguan consulate or embassy closest to you in order to determine your personal visa requirements.

If you are planning to volunteer in Nicaragua for more than 90 days and you are a citizen of the United States, Canada, Australia, New Zealand, or the European Union, you can extend your visa for 30 days at the migrations office in the Metrocentro mall in Managua.

Volunteer workers are usually eligible for temporary resident visas, which are typically granted in one-year increments. The requirements for such a visa change frequently and vary greatly depending on which immigration official reviews your file. As a general rule, however, you will need a medical certificate, a police background check, proof of financial self-sufficiency and a letter from the organization you'll be working with.

Please remember that the application process can take longer than a month, so we would like to advise you to plan enough time for it.