Volunteer with gorillas and contribute to the protection of these rare great apes in Africa...

Volunteer with gorillas and contribute to the protection of these rare great apes in Africa. Follow in the footsteps of Dian Fossey and get involved in a volunteer project that protects the critically endangered mountain gorillas in Uganda or Cameroon.

As their natural habitat shrinks continuously, they become more and more endangered. Make a change now and work with gorillas in a national park! Support the reforestation efforts and educate locals and tourists on the importance of protecting this endangered wildlife species. During your gorilla treks around the forest, you will get to witness the majestic apes from up close.

Enjoy the thrill of a gorilla trekking tour on this conservation project, set in a sanctuary that is home to half of the world's critically endangered mountain gorillas. 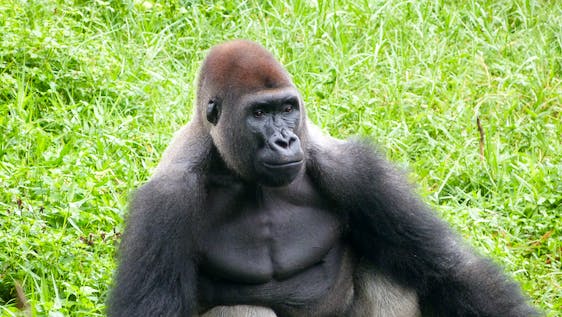 Did you know the word Gorilla originates from the Greek word "Gorillai" meaning ‘tribe of hairy women’? This was the description given by the Carthaginian explorer Hanno to the savage people he encountered on an expedition to the West Coast of Africa. Whether the anecdote is true or not, mistaking the largest primate on earth for a human is not a big surprise.

Gorillas share more than 95% of their DNA with us and express similar emotions to humans. These knuckle-walking herbivores inhabit the jungles and rainforests in Central Africa. As male Gorillas weigh between 135-195 kg and are about 1.5-1.8m tall, they’re not found in the trees along with their fellow great apes. These vegetarians spend their days foraging greens and fruits on the ground instead. Although females are about half the size of males, they too remain on the ground close, socializing with their troop.

If you’re squirming in your chair asking ‘Help! What can I do for gorillas?’ Don’t worry, as a consumer, we can play our part too. Just by visiting the gorillas, visitors support conservation projects through the provided funds. These projects not only raise awareness about gorillas amongst their visitors but actively work on creating awareness among the local community.

Thankfully, there are agreements in place to help conserve the gorilla population. The main one being The Gorilla Agreement which is focused on the conservation of gorillas and their habitat by the ten gorilla range states. The agreement obliges the governments of these states to combat threats such as illegal trade, poaching, and deforestation by implementing the necessary law enforcement.

🦍 Why Are Gorillas Important for the Environment?

Are you wondering why gorillas are important? Considering they just hang out with their troop eating and grooming all day, you might think their contribution to the environment is minor. This couldn't be further from the truth. Their past time is generally spent looking for foliage. As they do this, gorillas spread seeds across the forest enabling a variety of plants to flourish in the forest they inhabit. Their way of looking for food breaks trees which allows more sunlight to enter the jungle. This, in turn, gives sun-loving plants exactly what they need to thrive.

Gorillas are like gardeners who maintain their habitat which also happens to be the second-largest tropical rainforest in the world. The green heart of Africa without the gorilla gardener may have a disastrous environmental impact in the years to come.

🦍 Why Are Gorillas Endangered?

The western cross river gorilla is currently the world’s rarest great ape with a population of only 250-300. The mountain gorilla which counts a mere 880 individuals is the only species that has shown an increase in its population the past few years. The eastern lowland gorillas, although counting around 4000, is drastically decreasing in number each decade. With 100,000 gorillas, the western lowland gorilla has the highest population. There are a variety of factors contributing to the gorilla becoming an endangered species. Let’s a take a closer look:

As mentioned before, only 17% of gorillas live in protected areas. Unprotected areas face the risk of deforestation to commercial activities such as agriculture, mining, oil, and gas. The need to cut down trees to make room for these activities has decreased the area for gorillas to forage and survive. Deforestation has also enabled poaching as access to the gorillas has become much easier due to the clearance of the dense vegetation which previously hindered poachers.

Africa, being a poor continent, makes poaching tempting due to the monetary compensation for capturing exotic animals. Sometimes gorillas are killed for their meat or body parts or are even captured alive and sold as pets for private animal collections. Gorillas are often victims of traps set by poachers for other animals.

The Ebola virus alone is said to have wiped out 1/3 of the gorilla population since the 1990s. Due to the genetic similarity to humans, gorillas are susceptible to similar outbreaks affecting humans. Some examples are polio, hepatitis A, tuberculosis and intestinal parasites.

African countries like the Democratic Republic of the Congo and Rwanda are politically unstable resulting in frequent wars and armed riots. During these times, humans tend to invade new jungle territory belonging to gorillas. This invasion doesn’t allow them to roam safely and is, therefore, one of the contributing factors to the decline in the gorilla population.

🦍 What Are the Different Gorilla Species?

There are two main species determined mainly by their geographic location, each containing 2 sub-species:

Eastern gorillas have the darkest fur compared to western gorillas which tend to have a brown grayish color. Mountain gorillas are rather bulky due to their lack of activity in the mountainous terrain they inhabit. Lowland species, on the other hand, travel more and sport a slender physique.

If you’ve watched enough movies, you may have heard of the silverback gorilla which is an older male mountain gorilla. After the age of 12, male gorillas go grey around the back area. They are huge in size and are usually the sole male within the troop of female gorillas and their young.

Don’t mess with the man of the house as the silverback will ward off unwelcome visitors by beating his chest and bearing his canines. Despite occasional displays of aggression, mountain gorillas generally tend to be gentle and even shy. You’ll be able to judge for yourself when you witness them in action once you become a gorilla conservation volunteer!

🌍 Best Places to Volunteer With Gorillas

Africa, here I come! Gorillas are situated in both the Western or the Eastern part of Africa and spread over 10 African countries! The following countries are home to the Western gorilla:

The famous mountain gorilla can be sighted in:

Though it’s possible to see western gorillas in the West African countries mentioned above, the infrastructure and projects provided by countries like Rwanda and Uganda are more catered toward volunteers who want to contribute to the community. These countries are famed for their conservation projects inspired by Dian Fossey. If you remember the movie "Gorillas in the Mist", you are probably packing your bags this very minute.

Places to Visit in Uganda

As political instability and civil wars are finally a thing of the past, countries like Rwanda and Uganda have become a unique travel destination thanks to gorilla conservation projects.

Often referred to as the ‘Pearl of Africa’, Uganda boasts natural wonders like the Rwenzori mountains, Bwindi national park, the Nile Basin, and Lake Victoria. The name of this last wonder refers to Uganda’s colonial past which ended in 1962. If you’re excited about spotting this black beauty in the lush greenery of the Bwindi Impenetrable National Park, this is definitely for you! If you would like to take it further and are eager to connect with the local community, look no further. The gorilla conservation project in Uganda is perfect for you!

🤔 How Can I Help Save Gorillas?

If you’ve read this far, you obviously have a heart for gorillas! By joining a volunteer project for gorillas, you are in for a once in a lifetime experience. Besides having an incredible story to tell, you will have actively contributed to protecting this endangered great ape:

During the program, you can help educate locals but you can continue to spread the word until long after your volunteer experience

📋 What Will I Do As A Gorilla Conservation Volunteer?

The tasks you will have as a volunteer may really depend on the organization you choose to join as projects will differ. The thing they will all have in common is the viewing of gorillas in their natural habitat while other activities may vary. Just to give you an idea of what you can possibly expect:

🎁 5 Benefits of Volunteering with Gorillas

A Once in a Lifetime Opportunity

Seeing gorillas in their natural habitat is a once-in-a-lifetime experience that you will never forget. That alone is reason enough for many people to pack their bags and volunteer with gorillas. It's also incredibly fun!

If you are interested in connecting with locals, this opportunity will be a great fit. Engaging with the community will give you an insight into their lives will allow you to contribute by educating the younger ones. You will also meet other volunteers that share your passion for conservation.

Even if you are not planning on pursuing a career in this field, participating as a volunteer and actively contributing to a greater good demonstrates that you take responsibility and are motivated by a meaningful cause. Above all, it shows awareness of our environment and a willingness to take action. This kind of experience can set you apart from other candidates!

Taking on this adventure will give you more confidence to continue exploring and engage in other exciting endeavors. You'll notice you can't get enough of it.

Volunteering has proven to be beneficial to people's health and sense of happiness because it gives people a sense of purpose. Contributing to something greater than yourself is very therapeutic. Traveling is also great for your brain. It forces you to use parts of the brain you don't usually use when you go about your daily life.

We are excited to help you with your quest to become a gorilla conservation volunteer and guarantee this will be an adventure you will never forget!